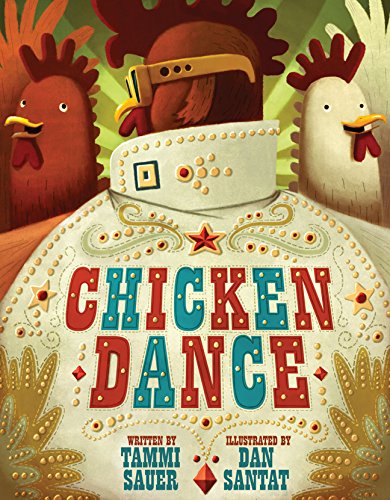 Move over, Susan Boyle: the next talent-that-comes-out-of nowhere is a pair of chickens named Marge and Lola. They're determined to win tickets to see a performance of their idol, Elvis Poultry. But they'll have to place first in the barnyard talent show—outscoring acts that include a trio of goats that eat a tractor onstage and cows that jump over the moon—and humiliate their snotty duck rivals. “Get some floaties, chickens!” shout the ducks after the chickens test their swimming prowess with unsuccessful results (“They totally sank”). With snappy banter (“We're on,” says Marge as their turn on the stage arrives. “We're doomed,” replies Lola) and tightly constructed storytelling, Sauer ( ) pulls off the neat trick of both embracing and spoofing the against-all-odds genre. Totally in sync with his collaborator, Santat's ( ) sculptural, mixed media pictures exude an old-fashioned, theatrical drama that lifts the many jokes—visual and textual—into sublime silliness. Ages 4–7.