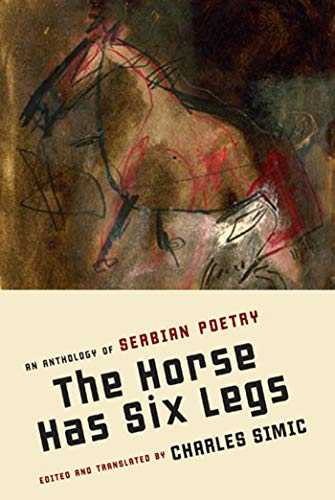 The Horse Has Six Legs: An Anthology of Serbian Poetry

Dyed with pessimism, touched by modernism, and bloodied by recent history, Serbian poetry has flourished, especially over the past 40 years. Simic, a former U.S. poet laureate, grew up in Serbia, and this collection of his translations shows both vernacular vigor and sensitivity to the poets' varied temperaments—grim and laconic, satirically expansive, lyrically embittered, or jocular. The shorter first edition of his anthology, from 1992, became a classic of poems in translation: Simic (whose honors include a Pulitzer Prize) has added six poets to the original set of 18. The oldest named poet here (not counting oral-traditional songs) died just before the Second World War, while the youngest came to maturity during the violent breakup of Yugoslavia. Rasa Livada's long “Horoscope” reacts to the recent disasters of the Balkans and to the end of the Communist dream, “somewhere between the electric west and the utopian east/ that which was 10 minutes ago utopia is now reality out of reach.” The well-known Ivan Lalic comes across as a serious love poet, praising “The taste of the storm in the stalk of the invisible rose/ That you twirl absentmindedly between your fingers.” Most of the poetry, though, strikes gloomier notes. Ljubomir Slovic delivers a compact curse (“May your wife knead dust,/ rain's bread dough”), while Branko Miljkovic seeks ecstatic extremes: “Empty what's in my lap/ And take my heart... Under the empty heavens the falconers cry.”