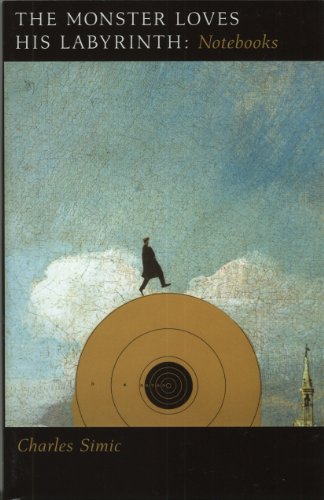 The Monster Loves His Labyrinth: Notebooks

The current U. S. poet laureate and a Pulitzer Prize winner, Simic is famous for his short, cryptic poems that draw on his eventful early life, which he describes in dramatic detail here, in notebooks he has kept for decades but never published in book form. The young Simic and his family lived in Serbia, as bombs fell on it, during World War II; later, they fled to difficult lives in Chicago, where the poet's high-spirited father was often penniless. The first of the notebooks' four sections collect compelling autobiographical reminiscences, of Serbia, of Chicago, and of the young adult poet's time in New York. The second collects the sort of images and juxtapositions that Simic might well have wanted to use in a poem—the best are, in effect, prose poems: “Snow arriving this morning at my door like a mail-order bride.” The last three of five sections do not always preserve the force of first: their statements about poetry in general, and their reactions to (and against) the academy, bear little surprise. Yet Simic's stature as a maker of poems still makes all of his prose worth reading, and the autobiographical sections make this book a keeper.