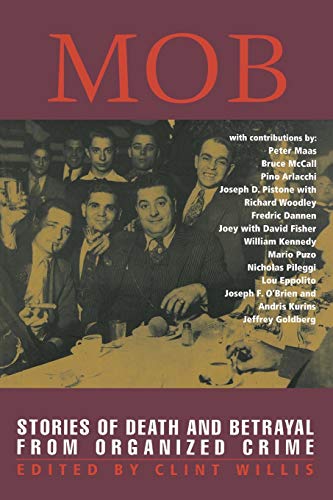 MOB: Stories of Death and Betrayal from Organized Crime

In the 16th title in the Adrenaline series (; etc.), series editor Willis presents a baker's dozen of bits of fiction and nonfiction, confessions and wiretapped confabs that are the best of the genre from authors Puzo, Pileggi, Maas and others. The families involved—Gambino, Bonanno, et al.—are no less renowned. Two parts nostalgia and one part investigative intrigue, the book serves up platefuls of stick-to-the-ribs tales of gangland murders, wise guys, heists and stool pigeons, delving fully into the structures and workings of the American Mafia. Standouts include an excerpt from Joseph D. Pistone's book about his shadowy life deep under cover as Donnie Brasco; instructions on administering a hit from the 1973 autobiography , by "Joey," written with David Fisher; and a selection from Pileggi's . Willis, in his introduction, describes his fascination with the criminal lifestyle, but refuses to glorify it; he confesses that he both fears and pities mobsters. Indeed, this pity for today's waning Mafia is echoed in what "Joey" says about hit men in 1973: "[E]xcept in New York there hasn't been much work lately, so I guess you could call us a dying breed." The familiarity in much Mafiana doesn't seem to deter fans (whether readers or viewers, e.g., of ), and the engrossing fiction and true crime tales collected here will whet many readers' appetite. Photos.