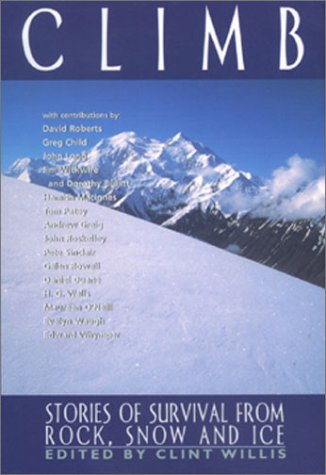 CLIMB: Stories of Survival from Rock, Snow and Ice

What do H.G. Wells and Evelyn Waugh know about mountain climbing? Listen to fine British stage actor Nick Sampson read Wells's gripping story "Little Mother Up the Morderberg" or an excerpt from Waugh's little-known but highly charged "Remote People," and be amazed. This latest offering in the zippy Adrenaline series should make readers' freeway-bound spirits soar, as a terrific team of professional readers brings to life some amazing true adventures of people going up against the highest and nastiest places on the planet. Editor Willis has chosen these selections for variety as well as excitement, and some of the top writing names in the climbing trade are represented: Galen Rowell (whose "High and Wild: A Mountaineer's World" is read with panache by Terence Aselford); John Long (two of his fine stories are well presented by Gary Telles); Pete Sinclair (his "We Aspired: The Last Innocent Americans" is treated respectfully by Aselford); and Maureen O'Neill (whose "Queen of All She Surveys" is given zesty life by Kimberly Schraf). Anyone in search of an escape will get real value for money and eartime with this impressive collection.