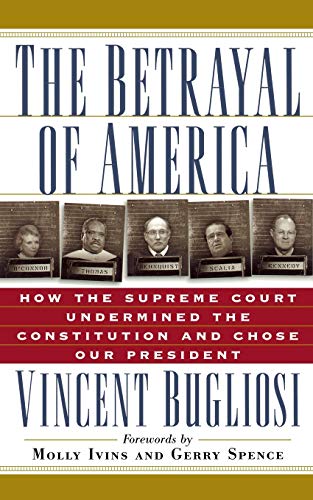 THE BETRAYAL OF AMERICA: How the Supreme Court Undermined the Constitution and Chose Our President

On December 12th, 2000, in a 5-4 decision, the U. S. Supreme Court put an end to the recounting of presidential votes in Florida, thus assuring that George W. Bush would win the election. This action by the Court's majority, argues trial lawyer and bestselling author Bugliosi, was a "judicial coup d'état" that stole the election from U.S. citizens and simply handed the presidency over to the Court's guy, a conservative Republican like themselves. It was also treasonous, asserts Bugliosi, if not by statute—it does not fit the legal definition of treason—at least in spirit; the five justices are "criminals in the very truest sense of the word," he says, who have exhibited "the morals of an alley cat." The Florida recount, claimed the Court, was invalid because it violated the equal protection clause of the 14th Amendment; as different counties used different methods for determining voter intent, voters were being treated unequally. Bugliosi argues, in precise yet accessible language, on page after page, that this justification does not stand up to scrutiny; that it is an incorrect and unprecedented use of the equal protection clause, feebly applied and argued, and was simply the best excuse the Court majority could come up with. Bugliosi, perhaps best known as the author of , often writes with the subtlety of a professional wrestler, but here he diverges from much of the outrage that passes for political commentary these days by backing up his bluster with careful legal analysis. The results—which, Molly Ivins calls "the modern equivalent of 'J'Accuse' "—are troubling and fascinating.