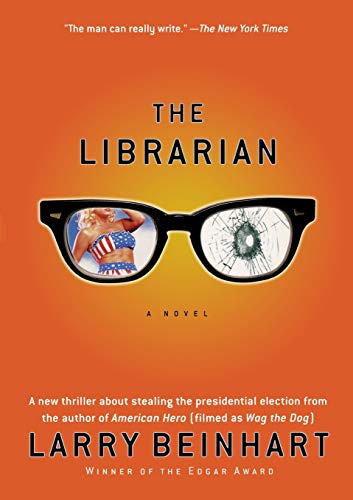 Beinhart's first novel in a decade (the last, , became the film ) takes a worst-case scenario conceived by leftist conspiracy theorists and runs riotously rampant with it. The Octavian Institute, an evil think tank, controls the George W. Bush–-like president, Augustus Winthrop Scott, and has a plan for world domination called the Project for the New American Century. Holding the financial strings of Octavian is elderly magnate Alan Carston Stowe, who has seemingly endless circles of henchmen. Into this cabal wanders unsuspecting David Goldberg, the librarian of the title, moonlighting from his university library job at Stowe's private collection. A series of misunderstandings—involving, for starters, a horny horse and a flirtatious married beauty named Niobe—turn David into a hunted man. The chase story line counterpoints Scott's dirty (and highly criminal) campaign for re-election against morally upstanding Vietnam veteran Anne Lynn Murphy. The plot turns in funny directions—David, for example, teams up with fellow librarians Inga and Susanne to form a Mission Impossible–like squad—but it's a tribute to the Edgar-winning author that he never winks at the reader. Though some elements are over-the-top, a creepy feeling of plausibility persists, and comic as it is, the novel completely engages interest as a thriller from start to finish.