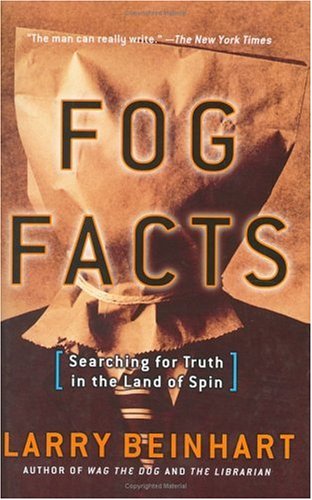 Fog Facts: Searching for Truth in the Land of Spin

Beinhart scored satirical points last fall with his novel , about an archivist whose talent for digging up damaging truths frightens a vast right-wing conspiracy with more than a passing resemblance to the current administration. The novel introduced the concept of the "fog fact": published information that remains unnoticed by the public. This slim volume promises to gather various fog facts about George W. Bush's presidency, but offers much more opinion than fact—specifically, amazement that reporting on subjects like the allegations that Bush pulled strings to avoid going to Vietnam or committed insider trading while his father was president didn't cost him either the 2000 or 2004 election. Beinhart sees the media's failure to call more prominent attention to political lies as the source of many Americans' "delusional" worldview, which he says led to war in Iraq. But his explanation of the "Soft Machine"—the media-industrial complex he says distorts our perception of reality and is the "enforcement arm of capitalism"—asserts rather than explains. Beinhart's freely associative tract could have used a more nuanced argument and suffers from digressions, like a lengthy exegesis on Horatio Alger's pedophilia, that, however entertaining, stick out awkwardly in a discussion of Dick Cheney's finances.