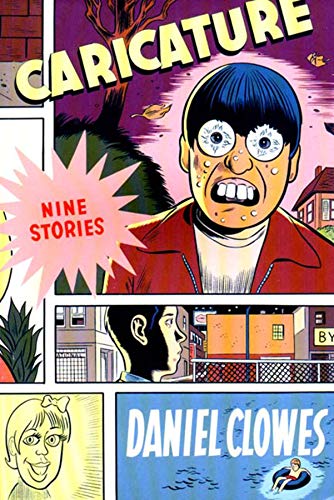 These nine stories show Clowes () as a writer compelled to produce infinite variations on the inner monologues of articulate, geeky loners. His characters exude a stylish, contemporary misanthropy; they're self-isolated, bland and ordinary, straight from some small town or emotionally dead family; and admittedly and intensely self-involved. They invariably substitute a trendy obsession—with media kitsch, porn, fashion, old folk music or with just looking bored—for empathetic communication or even small talk with others. These personages seem depressed and are usually fed up with most people. Though saturated in this tone of mannered disdain, Clowes's pieces are rescued from cliché and repetition by his expressive, meticulously glum drawings (in b&w and color) and a constant undertone of oddball, mocking hilarity. In the title story, he provides a portrait of an itinerant, county fair caricaturist and the unstable hipster brat-chick who insinuates herself into his life. In "Blue Italian Shit," he relates the story of Rodger Young, secret virgin and pathetic poseur, and his journey through a succession of bad late-1970s New York City styles ("there were fifteen minutes on this earth when I had a John Travolta haircut") and peculiar roommates ("Nat... listened to Kansas, and walked around naked"). In the supremely weird "Gynecology," Clowes deftly generates his characteristic emotional anemia in a story featuring a singing gynecologist and racist iconography. Clowes is a strange master at creating entertaining scenarios about contemporary social vacuity.