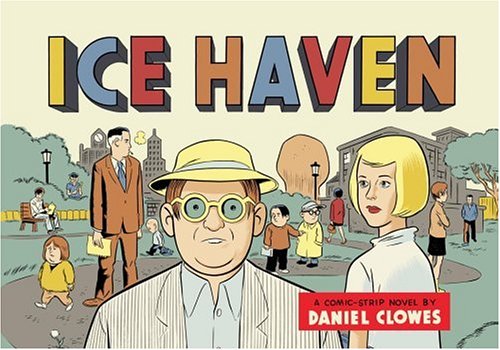 Clowes ( ) casts a harsh spotlight on the misfit dreamers who inhabit the small town of Ice Haven in this riveting graphic novel. Originally published in a somewhat different form as part of Clowes's occasional comic book , this piece finds Clowes moving beyond the withering satire of his earlier works to a more nuanced style. Readers will wince even as they feel sympathy for the self-deluded characters who reside in Ice Haven. Take narrator Random Wilder, writer of doggerel poetry. One would think it'd be easy to be the best poet in a place like Ice Haven, but Wilder has a rival: Ida Wentz, an old woman who likes to bake cookies. Wilder spends his spare time plotting against her. Ida's visiting granddaughter, Vida, also has literary yearnings, despite having sold zero copies of her fanzine. These and other oddballs play out their stories against the mysterious disappearance of a little boy named David Goldberg, whose possible murder recalls the Leopold and Loeb case. Clowes unfolds the multifaceted story as a series of brief comics, some drawn in a wildly cartoony style, others in his well-known mid–20th-century look. Masterfully blending fact and fiction, this is a funny, sad, chilling and absurd work.