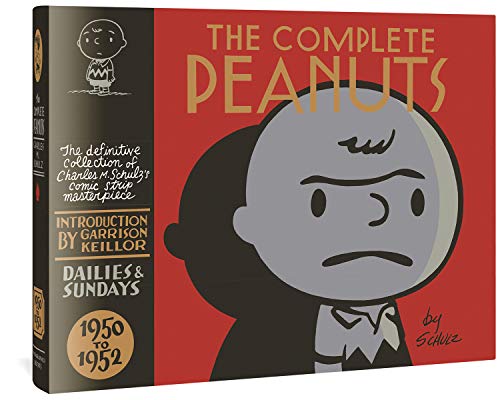 With its ambitious plan to reprint all of "Peanuts" in chronological order over the next 12 years, Fantagraphics is making this comics masterpiece available for everyone. The real surprise of this first volume is watching the beloved comic strip develop from its embryonic stage. From the start, Schulz had some of the ground rules in place: the ensemble cast whose faces appeared only in profile or three-quarter views, the sophisticated language from the mouths of babes and the absence of visible adults from their world. But, although "good ol' Charlie Brown" appears in the very first strip, the early protagonist is the rather colorless Shermy. Lucy is a googly-eyed baby in a playpen; Linus and Schroeder are pre-verbal infants; and Snoopy is just a small, affectionate dog without a fantasy life. Even more odd, the strip's unique hilarity hasn't quite developed yet; most of the humor here is very mild and generally stems from the characters being little kids playing with each other and fooling around with grown-up roles. They're archetypes of children, not yet archetypes of humanity. Still, flashes of Schulz's later greatness are evident. All the characters show hints of the personalities they'll grow into, and Schulz's clean, magisterially expressive line falls into position by the end of the strip's second year. Regardless, the chance to see the early "Peanuts"—much of it never before reprinted—is a treat.