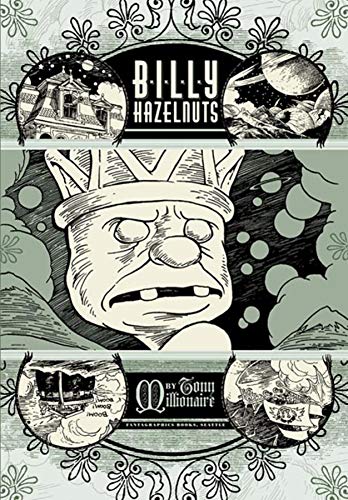 When the mice infesting a woman's kitchen tire of her efforts to rout them, they create a tough guy homunculus from foul-smelling garbage and turn him loose as their protector. Originally possessing a head full of houseflies, the garbage creature is discovered by Becky, a plucky kid scientist who swaps hazelnuts for the houseflies—thus the sobriquet Billy Hazelnuts. Together, they embark on a dreamlike series of adventures. Bolstered by extraordinary artwork reminiscent of woodcuts crafted by a madman, this narrative evokes the anything-goes child-logic found in darker fairy tales and the Oz stories with a pinch of Lewis Carroll thrown in for the sheer bizarreness of it all. Millionaire sweeps the reader along with the protagonists through encounters with a seeing-eye skunk, a search for where the moon disappeared to and a blistering sea battle between a matter-expanded toy replica of Noah's Ark—complete with two-by-two animals at the helm—and a flying pirate ship crewed by robotic buccaneer alligators. Millionaire is known for his dark yet wistful comic strip with this irresistible cornucopia of unbridled imagination run rampant, he has created a book with the eerie familiarity of a classic children's tale and solidifies his reputation as one of contemporary comic's great visionaries.