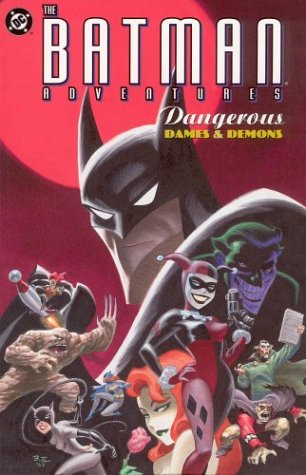 Dini and Timm, creators of the TV series, bring together previously published comics in this boffo book with classic comic book style. They take Batman back to his roots with a series of playful stories pitting real villains against good, old-fashioned heroes, with all of the action playing out in a magnificently gloomy Gotham City landscape. Batman wears black, the villains are in technicolor and Timm's lines are marvelously muscular. Short episodes feature villains such as Roxy Rocket, airborne jewel thief; Poison Ivy, mistress of confounding toxins; and Arnold Wexler, a reluctantly villainous ventriloquist. The Scarecrow, a college professor gone wrong, tortures his victims with mind games, while Clayface disguises himself while waiting to sit on Santa's lap at the department store. One longer episode involves demons attempting to take over the world (the theft of a magical tablet hidden in the cornerstone of a Gotham City building draws Batman's attention). The somewhat recent trend of exposing Batman's motivations and tortured past is absent here; the only character who comes in for extended analysis is Harley Quinn, the Joker's frustrated lover. Her story, "Mad Love," is the book's best, creating an entire history of romance and psychiatry for the Joker, a well as an inspired trap for Batman that's nearly the end of the Caped Crusader (the story won both the Eisner and Harvey Awards for Best Single Issue). Junior high readers and adults alike will find these tales satisfying.