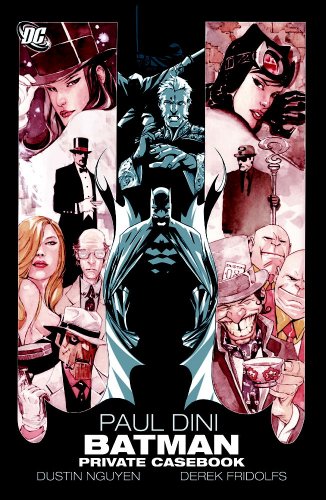 Dini and Nguyen's Batman stories from collected here are largely brief, self-contained mysteries, focusing on the colorful, bizarre characters of Batman's world. They're something of a throwback in tone to the superhero comics of the '60s and '70s: in one episode, the wicked Tweedledee and Tweedledum steal the Mad Hatter's mind-control technology to assemble “the Wonderland Gang,” which Batman busts up by the end of the issue. It's breezy stuff as contemporary Batman comics go, even making room for a little romance (a subplot concerns the Dark Knight's flirtations with the magician Zatanna and the sultry burglar Catwoman). Still, Dini gets a lot of juice out of the way his characters interact and comes up with clever ways to whisk each story toward its conclusion—“The Riddle Unanswered,” for instance, pivots around Batman hanging out in an online chat room of amateur detectives (and a few superheroes) to trade ideas about a case. Nguyen and Fridolfs's artwork complements these stories' mood with a loose, flowing style, built around jagged chunks of black, which owes something to contemporary animation.