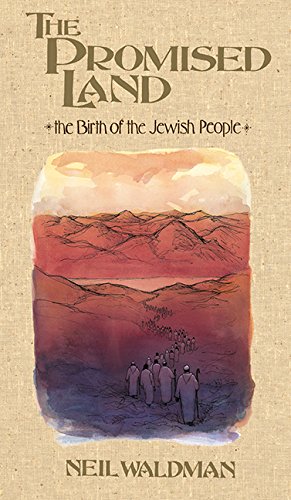 THE PROMISED LAND: The Birth of the Jewish People

A dramatic vertical format (7½"×13¼"), gold lettering on the jacket, gold borders within and abundant illustrations in Waldman's () reverent, contemporary style signal a gift book; this title is more impressive for its visual impact than for its text. Waldman links the survival of the Jewish people to Jewish faith in God's biblical promise of a land of milk and honey. He begins with Abram's journey to Canaan (identifying Abram as "a good and decent nomadic tribesman [who] was visited by God"), then asserts, "A profound connection is forged that will endure for thousands of years. It is the relationship of a wandering desert people to a cherished piece of fertile soil, a land that will come to represent their hopes, dreams, and aspirations." The text frequently demands a lot from young readers (even when Waldman later names Abram as the first Jew, he doesn't explain why), but elsewhere makes simplistic arguments, particularly in his monolithic descriptions of Judaism ("Their religion has remained intact since the days of Baal, Zeus, Cleopatra, and the pyramids"). The watercolors, on the other hand, are consistently moving. In strikingly lit desert colors the artist evokes the Jews of Moses' day, and he darkens his palette to intersperse images of other Jews far from a homeland—Eastern European boys; an old man with a yellow star on his coat; a contemporary man holding a Torah scroll. When Waldman finally shows "the sacred soil of Canaan" (he doesn't name Israel), his work is subtle: the land is green but open, suggesting harvests yet to come. Ages 10-up.