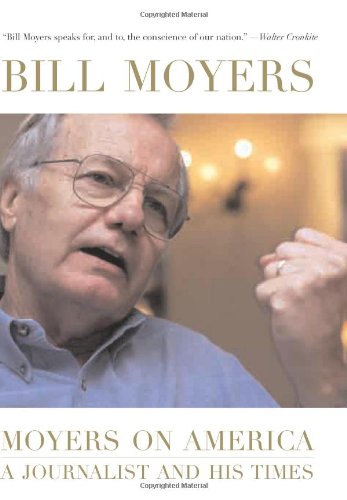 MOYERS ON AMERICA: A Journalist and His Times

"I am a journalist but I am also a pilgrim," Moyers declares in this eloquent selection of his speeches and commentaries. Although these 20 pieces have been edited to resemble essays, their origin lends them a rousing urgency, as Moyers relates stories and insights in his personal journey from small-town Texas boyhood to eminent broadcast journalist. Whether he's extolling the virtues of participatory democracy based on the early 20th-century Progressive movement or lamenting recent evidence that democracy is on the auction block with politicians bought by special interests, Moyers's ability to communicate history, philosophy and personal experience simultaneously is impressive. His instinct for enlisting stories to get his message across appears throughout this collection, including tales from the years he worked for Lyndon Johnson (before and after Johnson became President). In a portrait of Johnson's political strengths and personal weaknesses, a less canny storyteller might leave out the telling anecdote about LBJ's integrating the Faculty Club of the University of Texas in 1964, but not Moyers. The same combination of candor, vividness and forthrightness animating his Johnson portrait is what gives such authority to Moyers's arguments that responsible journalism of unquestioned integrity is essential to our democratic process and that domination of news media by conglomerates, along with trends in celebrity-obsessed journalism, is undermining the freedom of the press. Moyers's wisdom, common sense and deeply felt principles should inspire and energize many readers in the very best way.