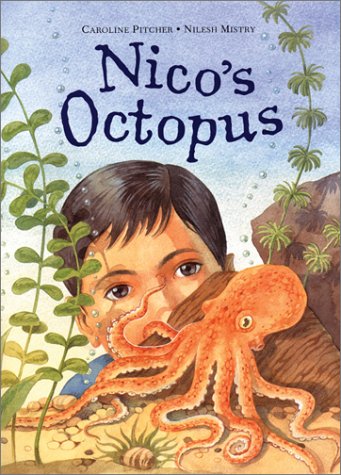 Pitcher () and Mistry () teach readers about the life cycle of an elusive ocean-dweller in this agreeable story of a boy with a pet octopus. Set in what appears to be Greece, the book opens as Nico spies "an alien" in a fisherman's net: "It had rays of pink light streaming out behind it." Readers may be disappointed that the marvelous apparition can only be glimpsed within Mistry's realistic, full-spread rendering of a small Mediterranean dock. But a few spreads later, he offers a detailed view of the octopus in a bucket of sea water, which Nico uses to sneak the creature home. Kids will be intrigued by the octopus's behavior, as Pitcher describes how it can change color, recognize Nico, separate crab meat from the shell and so on. When the octopus stops eating (and finally "collapse[s] like a broken umbrella"), Nico is heartbroken until an old fisherman diagnoses the problem: the octopus has laid eggs. While the plot is a bit contrived, it packs a lot of easy-to-assimilate information, and the airy illustrations allow—and invite—plenty of close-up inspections. An endnote rounds out readers' understanding of the sea creature. Ages 4-8.