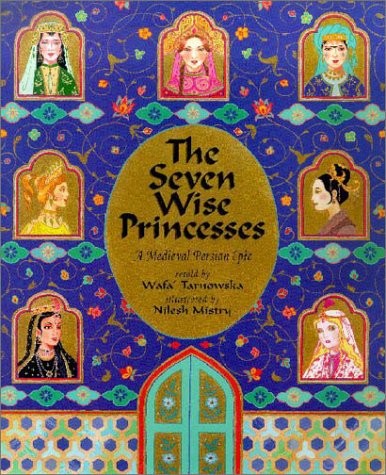 Tarnowska bases this multidimensional if uneven collection of tales on 12th-century Persian poet Nizami's epic poem Haft Paykar. One day, Bahram, the son of the shah of Persia, discovers a secret room in the grand palace built for him by the king of Yemen, to whom the shah has sent his son to be raised. The portraits of seven fetching princesses--from India, China, Russia, Greece, Arabia, Persia and Morocco--line the chamber's walls, and Bahram vows he will one day meet these beauties. After his father's death and his ascension to shah, Bahram invites them to visit his own palace, and they each tell him a story, the morals of which convey the importance of patience, truth, faith, passion, serenity, fairness and devotion to God. Many of the plots are riveting, such as ""The Raja Who Dressed in Black,"" who grows too impatient to achieve a kiss from the queen of Houris (fairies), or ""The Story of Good and Bad,"" in which a good friend forgives the acts of a bad one; but others seem protracted and labyrinthine (e.g., the Moroccan princess's tale). The language does not achieve that of its poetic origins; the prose is often clunky or clich'd (a wealthy Egyptian is described as having been ""born with a silver spoon in his mouth""). And readers may be caught off-guard by the abrupt ending of the frame story (Bahram disappears in a cave). Mistry's (Stories from the Silk Road) ornately bordered, gouache paintings effectively portray the thematic and chromatic content of each entry and include some lovely, intricate mosaics and patterns. Tarnowska's retelling offers insight into a range of cultural lore and symbolism, but may prove esoteric for many young readers. Ages 10-up. (Aug.)
close
Details