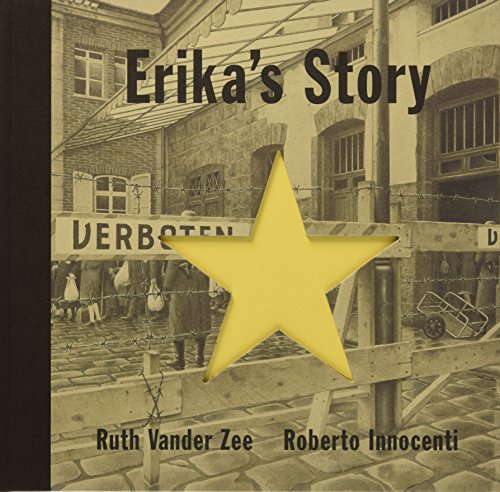 This picture book may raise more questions than it answers, starting with the five-pointed die-cut star on the cover, a window to the yellow page beneath. Is this supposed to be a reference to the Star of David, like the one worn by Erika, whom the author (in an author's note) claims to have met in a German village in 1995 and whose story she purports to tell here? Erika believes she was a few months old when she was thrown from a train bound for Dachau and saved by a kind and courageous woman. Her Erika is caught in lengthy conjecture about her parents and their tragic plight. Of her rescuer and of her own life Erika says little, other than the critical news that she has children and grandchildren, and that her star "still shines." (Perhaps this is what's meant by the cover?) Vander Zee has more the beginnings of a story than a nuanced work, but Innocenti ( ) lives up to his admirers' expectations with his haunting, even harrowing drawings. Grim black-and-white illustrations show adults and children entering cattle cars, their faces blocked by headscarves or by the barrier reading "Verboten"; the German soldiers present only their impervious backs to readers. As the train pulls out, Innocenti imagines a snow-white baby carriage left by the track, its emptiness speaking volumes. With other images, both real and nightmarish, the art conveys a measure of the anguish of the Nazi victims' vulnerability. Ages 10-up.