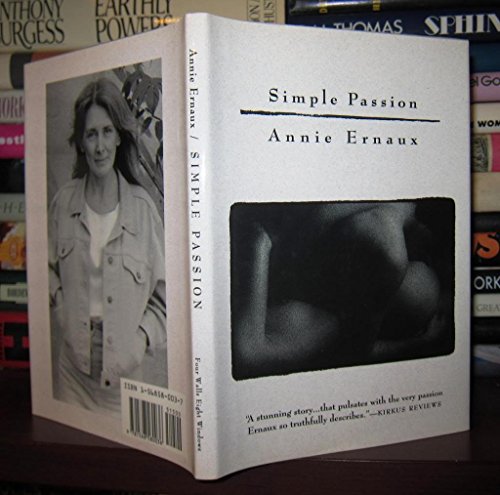 Because Ernaux has written about her mother ( A Woman's Story ), her father ( A Man's Place ) and herself ( Cleaned Out ), one can almost hear an anxious tremor in the narrator's (Ernaux's?) lover's voice as he says, ``You won't write a book about me.'' But she has. Actually, it's not about him but about their affair and even more about the intense time between their intimacies. ``I've experienced pleasure,'' she says, ``as future pain.'' At the peak of their liaison, the successful, well-educated narrator is able to concentrate only on what furthers or reflects her passions: she shops for clothes, listens to popular songs, reads the horoscopes in women's magazines, watches pornographic television, searches for a theater showing Nagisa Oshima's carnal In the Realm of the Senses and, of course, waits anxiously by the phone. Whether or not ``A,'' a married Eastern European businessman, was ``worth it,'' is, she says, ``of no consequence.'' Ernaux alternates between writerly objectivity and total immersion, blurring the line between fiction and autobiography. Throughout, one finds oneself noting, ``but, of course, this is a novel'' only to add a few pages later ``but, of course, this is real life.'' Since less time has elapsed between events recorded here and those she so poignantly recalled in her earlier books, perhaps it is just this lack of reflective distance that makes Simple Passion less successful than its predecessors. (Sept.)
close
Details