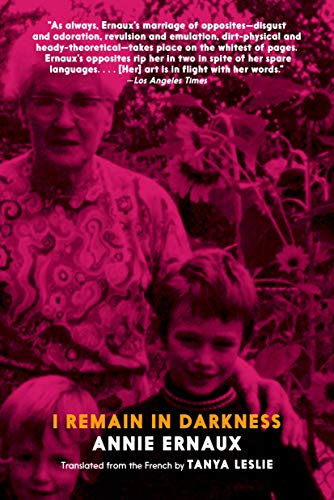 I Remain in Darkness

Again blurring the line between memoir and fiction, Ernaux continues the story of her family in journal form. This slim volume is a quietly searing account of Ernaux's mother's deteriorating health after she was diagnosed with Alzheimer's disease, in 1983, and her heart attack and death in April of 1986. At first the formerly independent mother moves in with Ernaux and her sons. Then, as her memory losses become crippling, she is admitted to a geriatric hospital. Ernaux keeps a journal, recording the details of her mother's slow decline: the way she shrinks until she's like a little doll, the diaper she wears to control incontinence, the smell of the cologne that masks sickroom odors. Ernaux also records her own reactions: she is defiant when shopgirls eye her mother with contempt, dismayed when her mother no longer even tries to look for her mislaid toiletry bag, guilt-ridden but trying to remain emotionless as the years pass by, then finally overwhelmed by a flood of feeling after her mother's death. The selection of significant detail is thoughtful and poetic, arranged in a simple memoir format. Several recurring themes are woven throughout, notably those of time, art and the relationship between mother and daughter. Ernaux suggests that the beloved mother who gave her birth (reminding her of the Courbet painting The Origins of the World, which depicts the open thighs of a recumbent woman) is being consumed by time and that Ernaux, through her art, can restore her original image. It is a motif similar to, although in no way as richly developed as, that of Shakespeare's Sonnet 15: ""As he [time] takes from you, I engraft you new."" Like Ernaux's other work (Shame; Simple Passion), this is ""not literature"" exactly, but ""an attempt to salvage part of our lives, to understand, but first to salvage,"" poignant though limited in its reach. (Nov.)
close
Details