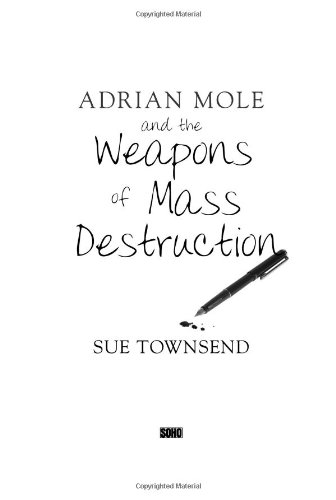 Adrian Mole and the Weapons of Mass Destruction

This fifth installment of Adrian Mole's diary ( ; , etc.) breaks new ground with its concern for current affairs and its sympathetic treatment of not-always-exemplary characters. Adrian, as usual, is struggling with various relationships and with constant financial problems, always trying to do the right thing, but usually giving in to his baser urges, in love and in spending. He becomes accidentally engaged to dollhouse-building homebody Marigold while spending flirtatious evenings with childhood love Pandora; fires off missives to the likes of Tony Blair and Tim Henman; and works, genuinely, to be a good father, friend and ex-husband to a cast of often bizarre but always human characters. Townsend, author of numerous non-Adrian novels, plays and nonfiction, makes Adrian's adult disorientation palpable as he tries to figure out how he went from hosting a popular television show to working in a failing second-hand bookshop, and copes with the shock of seeing childhood bullies make good and childhood dreams go awry. Arguments about the war figure prominently: one of Adrian's sons is sent to Iraq; his best friend, Robert, is there, too. Adrian's reactions to the war are complex, funny and wrenching. By the time the diary breaks off (on Sunday, July 22, 2004), things are looking up for Adrian and a bridesmaid—and he is considering (to her consternation) writing an autobiography.