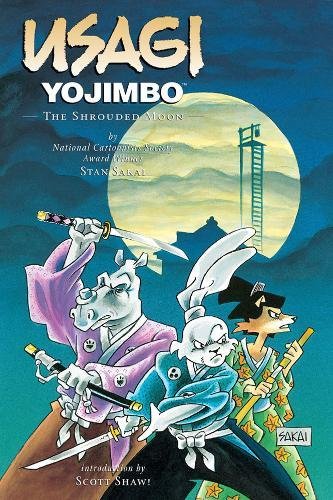 Sakai's rabbit samurai Usagi Yojimbo has been around since 1984, and this latest collection of the ongoing comic makes it easy to understand the character's longevity. Sakai has the ability to make stories instantly and universally accessible. Although the cartoony b&w art and the gimmick—anthropomorphic animal warriors adventuring in the legendary past of 17th-century Japan—would seem to be a set-up for saccharine or simplistic stories, the series has a grim edge. Death is always a possibility for Usagi. In the opening story, "Showdown," he and his rhinoceros bounty hunter friend Gen arrive in a town where two rival gangs are terrorizing the townsfolk. Of course, the pair sets out to fix things, in a sting that finds them playing each side against the other. Usagi is brave but hardly infallible—even though they defeat both bosses, Usagi and Gen end up as penniless as they started out. In "The Shrouded Moon," Usagi and Gen set out to aid a beautiful thief, a fox named Kitsune, in a dangerous mission. Despite the fantasy setting, the feudal world is scrupulously researched. Sakai's blending of words and pictures is utterly assured, and he uses his fun style to great effect. Like the best animated characters, Usagi and the rest of the cast is capable of a broad range of emotions. Blending classic storytelling, flawlessly designed art and lovingly researched period touches, is a true all-ages comics treat.