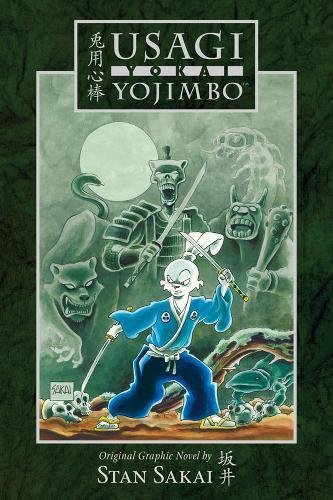 The heroic but sweet-tempered samurai rabbit celebrates the 25th anniversary of his first appearance in comics with this fully painted hardcover. Yokai are the evil supernatural creatures who can invade this world on dark nights; Usagi is walking through a forest on such a night when a distraught mother begs him to find her daughter, who's been stolen by a shape-changing kitsune. He meets a variety of hostile spirits and demons as he undertakes that mission. He also encounters his enigmatic acquaintance Sasuke the Demon Queller, from whom he learns that the yokai are gathering to swarm into the human world and conquer it. It's up to the two anthropomorphized little animals to stop them. Sakai's art deftly demonstrates that comics can be simultaneously cartoony and scary, especially in a double-page spread of the Demon Queen and her hoard; moreover, the comic's design, linework, and coloring are simply lovely. Unlike the bleak cynicism of many contemporary comics, this beautifully produced little book shows how much love Sakai still has for his rabbit ronin. A 2009 Eisner Award nominee for Best Continuing Series, is a genuine pleasure for readers of all ages. Ages 9–12.