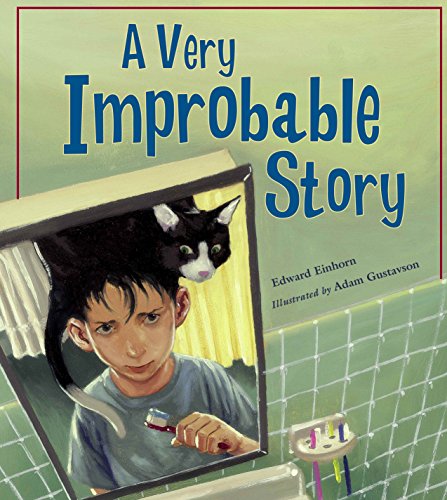 Kids who like math will readily overlook the contrived storytelling for this book's clear introduction to an underserved topic: probability. On the day of the last soccer match of the season, Ethan awakens to discover that a talking cat, fittingly named Odds, has attached itself to his head and won't get off until the boy wins a probability game. “ 'Don't put on your socks yet,' ordered Odds.... 'You'll win if you can pull out 2 matching socks without looking.' ” Einhorn's ( ) cut-to-the-chase style will have math enthusiasts rapidly engaging their skills to keep up with the fast-paced albeit strained dialogue. The supercilious Odds refuses to give an inch and seemingly delights in the boy's initial missteps (“Ta-dah!... You lose,” he quips, more than once). Despite Odds's disdainful style, Ethan eventually wins a game and goes on to figure his soccer goal–making odds. Gustavson ( ) helps explain the subject with occasional vignettes (for example, an illustration of possible marble color combinations clarifies Ethan's chances of pulling two white marbles during one of the cat's challenges) but otherwise his paintings seem forced. Ages 7-10.