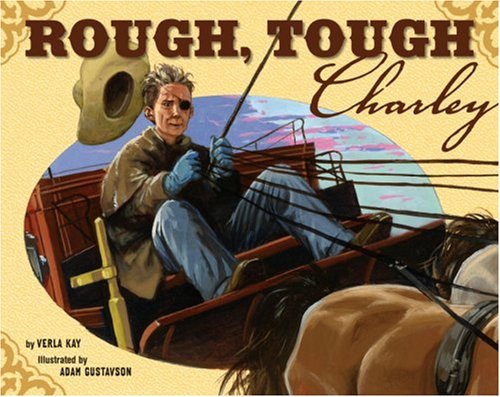 any folks thought they knew the real Charley Parkhurst (1812–1879): a scrappy orphan who possessed an almost magical rapport with horses and who became one of the bravest, fastest, saltiest and most respected stagecoach drivers in Gold Country. Charley was the kind of noble, tough-as-nails character who perfectly embodied the rugged individualism of the West. But everybody had Charley wrong, for as the doctor who certified his death discovered, Charley had successfully disguised the fact that he was actually a woman. As in her previous historical picture books, Kay ( ) writes in what she calls “cryptic rhyme”—terse four-line stanzas that evoke the no-nonsense speech of the frontier: “Charley working,/ Handles reins./ Learns to doctor/ Cuts and sprains./ Charley driving!/ Gaining fame./ Folks requesting/ Him by name.” Kay's strict meter keeps Charley's inner thoughts at a distance from readers, so that Charley effectively holds onto her secret until the book's end, just as she did in real life. Gustavson's ( ) lush, realistic oil illustrations are a lavish counterpoint to Kay's spare verse, are suffused with the romance and roughness of a bygone era. His vivid characterizations and cinematic framing would make John Ford proud. The twist regarding Charley's gender should come as a genuine surprise; readers will likely pore over the excellent timeline on the final spread to glean further details of this true and compelling story of secret identity and proto-feminism. Ages 4-8.