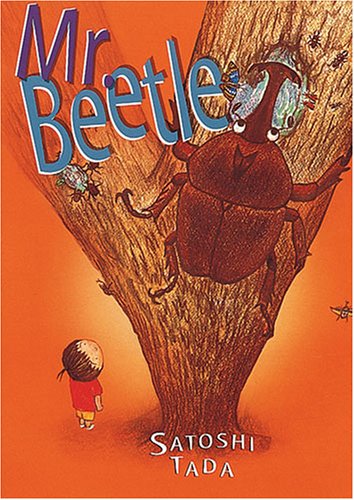 Japanese movies were once famous for featuring oversize insects; Tada's picture book follows suit, but gently, for youngest bug fans. One wintry day, Yoshi unearths and brings home a large white rhinoceros beetle grub. The illustrations scientifically chart the grub's progress as it grows a hard shell and finally emerges on a hot summer day. But here, the tale takes a different course. "The enormous beetle popped out of the ground." It emerges boy-sized, and Yoshi names him Mr. Beetle. The remainder of the book considers what would happen if beetles were as large as humans yet retained their beetle-like characteristics. Mr. Beetle jumps rope at high speed with the help of his powerful wings, floats in the bath and can locate Yoshi in the middle of Tokyo by smell alone. The boy even introduces the giant insect to his friends. But when Yoshi can't supply the tree sap that provides the eponymous hero's primary sustenance, he realizes that he has to lead Mr. Beetle back to the forest. Tada's deceptively simple crayon drawings often pay closer attention to the beetle's structure and appearance than to the boy's, and do not bring much visual life to the friendship between the two. But they do make interesting use of perspective as the boy desperately seeks missing Mr. Beetle on the streets or rides atop his flying friend's back. This tale is likely to appeal to converted bug-lovers and children with imaginary friends. A spread of beetle facts rounds out the volume. Ages 3-8.