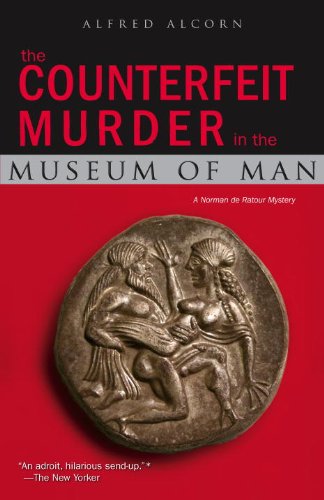 The Counterfeit Murder in the Museum of Man: A Norman de Ratour Mystery

At the start of Alcorn's uneven third Norman de Ratour mystery (after 2009's ), Norman, the Museum of Man's director and the book's bloviating narrator, discovers a murdered man in a parked car near the museum, located in the New England town of Seaboard. Unfortunately, the victim is “honorary” numismatics curator Heinrich “Heinie” von Grümh, a wealthy MOM contributor. Worse, Heinie turns out to have been shot with Norman's revolver, making him a prime suspect. Meanwhile, Norman must find a new home for a highly articulate chimp, fend off neighboring Wainscott University's efforts to take over the MOM, and look into whether the antique coins Heinie gave the museum are fakes. Alcorn's barbed darts at academia and the rarified world of top-notch museums amuse, but humor alone isn't enough to redeem a rambling tale of wavering morals populated by mostly unattractive characters.