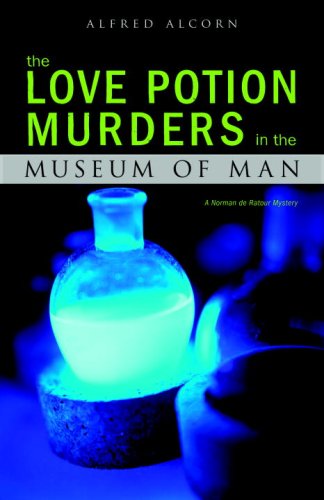 The Love Potion Murders in the Museum of Man

At the start of Alcorn's entertaining second Norman de Ratour mystery (after 1997's ), Norman, now the Museum of Man's director in the vaguely New England city of Seaboard, ponders the mysterious deaths of two colleagues. The bodies of Prof. Humberto Ossmann and Dr. Clematis Woodley, who detested each other, were discovered in sexual embrace on the floor of the genetics lab where they worked. Grim news about the health of Norman's wife, Elsbeth, and the arrival of her grown daughter, Diantha, throw him into a frenzy of guilt and lust. The fate of a missing anthropological expedition is further cause for concern. Alcorn, a former travel director for a Harvard University museum, illuminates the machinations and turf wars of feuding museums and universities with dark wit. Some readers may find the puns and alliterative names (e.g., food critic Korky Kummerbund) too heavy-handed, but those with a taste for satirical whodunits will be well rewarded.