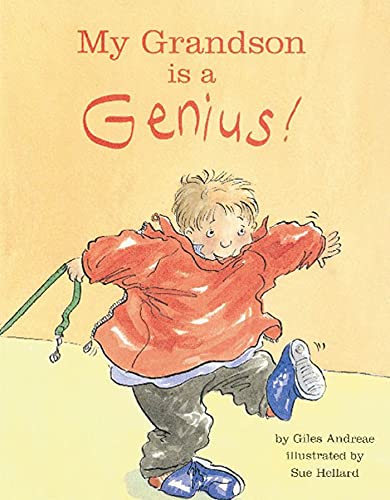 MY GRANDSON IS A GENIUS!

"My grandson is a genius!" explains Grandpa, the proud if heartwarmingly oblivious narrator and baby-sitter of the titular two-year-old. "It's plain for all to see,/ I'm sure it won't be long/ Before he gets a Ph.D." Indeed, if Nobel Prizes are awarded for spreading jelly in the VCR, howling in the grocery store, splashing paint and putting food on one's head, this kid's a shoo-in.

Hellard () wisely gives reality just the tiniest of nudges to make the comic point that Grandpa sees his diminutive descendant through rose-colored glasses. The gentle slapstick that arises from the disconnect of what Grandpa says in Andreae's () narrative and what is depicted in Hellard's fluid, slice-of-life watercolor-and-ink drawings define unconditional love (in one vignette, the Olympic-caliber Junior kicks a ball that knocks off Grandpa's glasses, which then land on a garden gnome's fishing pole). Whether the irony that drives the book ("His parents sometimes say/ That he's a little bit like me!") will be lost on younger kids is another issue; one suspects that it's the doters, and not the objects of their affections, who are the real audience. Ages 4-8.