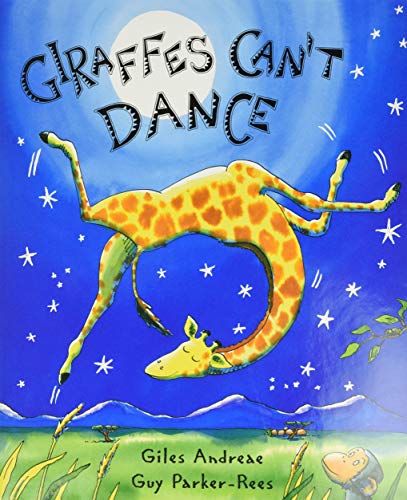 All the jungle's got the beat, but Gerald the giraffe has four left feet. Such is the dilemma in this British team's bouncy if didactic picture book about self-esteem. As a multitude of fleet-footed beasts eagerly "skip and prance" at the annual Jungle Dance in Africa, Gerald feels sad "because when it comes to dancing/ he was really very bad." Jeered by waltzing warthogs and cha-cha-ing chimps when he attempts to cut a rug, Gerald hangs his head and leaves the celebration behind. Luckily, a friendly cricket appears in the moonlight, chirping a morale-boosting song of self-confidence that soon sets Gerald in graceful motion. Andreae's rhyming text has a jaunty rhythm that's likely to spark interest in the read-aloud crowd, in spite of a heavy-handed message. Parker-Rees's kicky depictions of slightly anthropomorphic animals boogying on the dance floor are the highlight here. His watercolor and pen-and-ink artwork exudes a fun, party vibe. Ages 3-6.