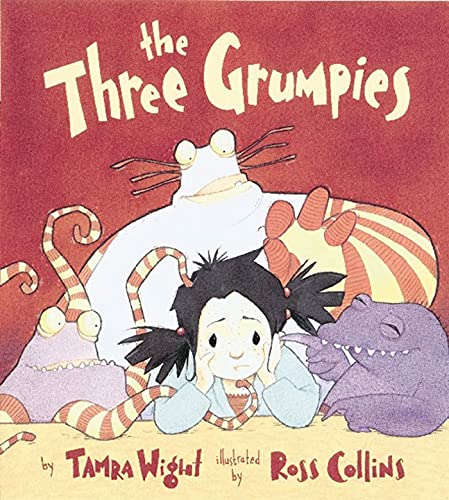 What, exactly, awaits a girl who wakes up on the wrong side of the bed? Why, the Grumpies, of course. At least that's the scenario at play in Wright's picture book debut, an ultimately flat (and at times confusing) attempt at encouraging young readers to identify and deal with feelings. As a girl narrator awakens in the morning, the Grumpies—three slug-like, monsterish creatures dubbed Grumpy, Grumpier and Grumpiest—are waiting for her. The trio proceeds to make her day miserable, causing her to spill her milk, lose her shoes and homework, and trip on her way to the school bus. The adults in her world suggest different strategies for handling the Grumpies, but none seems to put the creatures/feelings in their place—until the narrator finally discovers a simple key to banishing them on her own. Unfortunately, Wright employs a coy tone that never believably fits the emotional skin of her child character. The simplistic text seems to impose an adult interpretation of feelings on the story rather than authentically celebrate kid empowerment and self-expression. Throughout, Collins's ( ) lumbering, mischievous Grumpies try to steal the watercolor scenes with their antics, but they can't quite overshadow the very surly-looking protagonist. Ages 4-8.