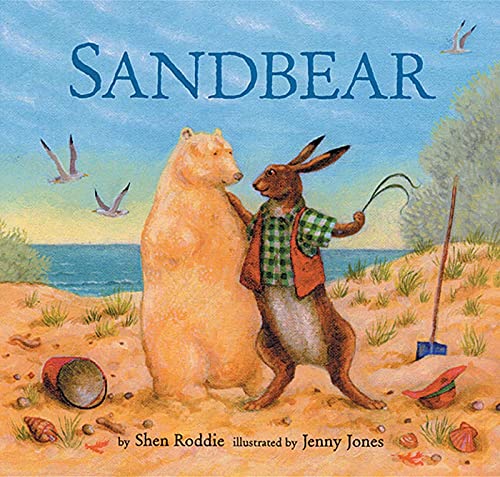 "Out in the dunes, a wild wind blew and the sands shivered. It made quivery sand waves and puffy little sandhills." With this lilting beginning, Roddie () launches a magical tale about imagination, creativity and responsibility. The mounds of shifting sand inspire Hare, a towering, dapper fellow in a red vest and floppy hat, to sculpt a bear. But the harried Hare doesn't take great pains with his art—unlike Welsh artist Jones, whose golden-hued, finely textured acrylic paintings exude a meticulous sense of craftsmanship. "I'd love to make you handsomer but it's hard work and I don't have all day," Hare says to his creation. He tosses sand about to fashion an approximation of an ursine body, pokes in a single strand of sandgrass for an arm and slaps on a piece of driftwood for the nose. Hare abandons the sand sculpture without another thought, but Sandbear shivers to life—an eager-to-please gentle giant. When Sandbear proves he's willing to sacrifice himself to save his creator, Hare realizes there's more to what he's made than a moment's diversion. Jones depicts a tearful Hare devotedly recrafting Sandbear with the substantial features of a hero. A lovely, understated joy radiates from the final scene, in which the rejuvenated Sandbear piggybacks Hare into the woods for a picnic—the beginning of a beautiful friendship. Ages 4-up.