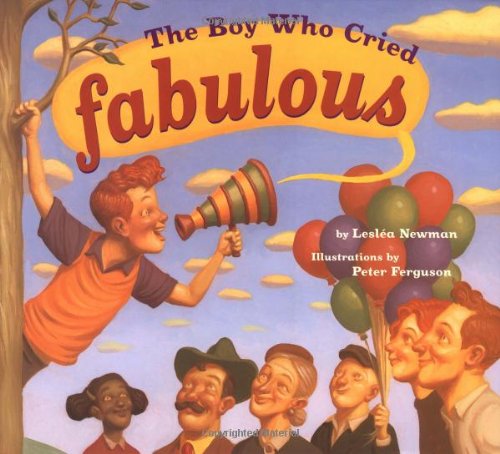 THE BOY WHO CRIED FABULOUS

Fans of Harvey Fierstein's will appreciate this tale starring young Roger, who finds life so "fabulous" that he has trouble staying on task. Walking to school one day, he's consumed by the wonders of a department store. "What a fabulous man/ in a fabulous hat./ What a fabulous tie,/ or perhaps a cravat?" writes Newman ( ; ). After showing up late at school and home ("It's so fabulously !" he notes, as the realization of his tardiness hits), Roger tries to curb his enthusiasm. But when he goes into town with his parents, he teaches them an important lesson: fabulous is fun. Roger's vocabulary of exhortations (which eventually include "splendid," "luscious" and "scrumptious") is not au courant, but Ferguson, making his children's book debut, smoothes over that potential speed bump with burnished, acrylic paintings that depict Roger as a lively visual throwback. The boy's shockwave of red hair and high-cheeked, bright-eyed face brings to mind 's Jimmy Olsen or one of . Other retro flourishes (the grown-ups wear hats, the cars sport bulbous fenders), along with Ferguson's theatrical framings, also firmly plant the story in a whimsical realm—which makes it easy for readers to go along when the artist pictures Roger dancing a jig on a diner countertop. Adults may declare they know camp when they see it, but kids will always cotton to a character who marches to a different drummer—especially one with a beat. Ages 5-7.