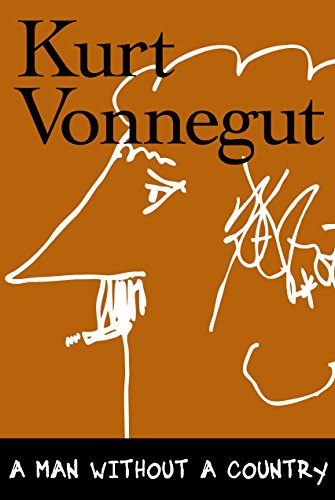 A Man Without a Country

In his first book since 1999, it's just like old times as Vonnegut (now 82) makes with the deeply black humor in this collection of articles written over the last five years, many from the alternative magazine . But the pessimistic wisecracks may be wearing thin; the conversational tone of the pieces is like Garrison Keillor with a savage undercurrent. Still, the schtick works fine most of the time, underscored by hand-lettered aphorisms between chapters. Some essays suffer from authorial self-indulgence, however, like taking a dull story about mailing a manuscript and stretching it to interminable lengths. Vonnegut reserves special bile for the "psychopathic personalities" (i.e., "smart, personable people who have no consciences") in the Bush administration, which he accuses of invading Iraq so America can score more of the oil to which we have become addicted. People, he says, are just "chimpanzees who get crazy drunk on power." Of course, that's exactly the sort of misanthropy hardcore Vonnegut fans will lap up—the online versions of these pieces are already described as the most popular Web pages in the history of