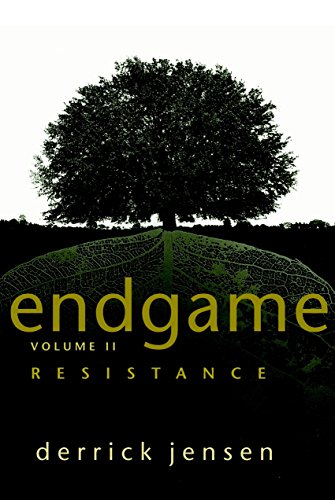 Endgame: Vol. I, The Problem of Civilization; Vol. II: Resistance

The author, who in earlier books like discussed his experience of violence and abuse as a child, calls now for determined and even violent resistance to environmental degradation. Jensen comes across in volume I as a provocative but personable philosopher-activist who in lyrical and witty writing bemoans species extinction, sullied air quality, shrinking icecaps, expanding deserts and vanishing forests wrought by humans. But Jensen believes "this culture will not undergo any sort of voluntary transformation to a sane and sustainable way of living." Civilization, he says in volume II, is killing the planet, so "[c]ivilization needs to be brought down now." Jensen dwells through several chapters on the need to destroy tens of thousands of river dams, whether with pickax-wielding citizen armies or through the use of well-placed explosive charges; other chapters consider how simple it would be to paralyze the American capitalist system if small activist cells were to disrupt railway, highway, pipeline and other elements of commercial infrastructure. Jensen clearly feels a close connection to nature, writes movingly about the hoped-for return of the salmon, the trees, the grizzly bears. But he has become so disgusted with what he calls "civiluzation" that he has more compassion for the salmon than for his fellow humans.