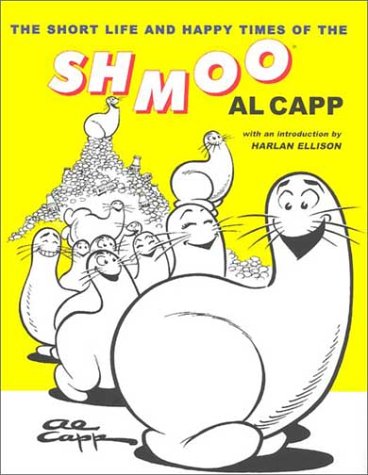 THE SHORT LIFE & HAPPY TIMES OF THE SHMOO

Those who remember the Shmoo as the star of a short-lived 1970s animated TV series may not know its origin in two of the most acerbic and hilarious sequences ever to have appeared in an American comic strip, both of which are reprinted here in their slightly redundant entirety. As Capp presented Shmoos in a four-month run of in 1948, they're the ultimate symbol of consumerism: blobby little creatures that provide entertainment and companionship, lay eggs (in cartons), give "milk, butter, an' all types o' cheese—both domestic and imported," and die on the spot of sheer happiness if you look at them hungrily. Indeed, with Shmoos around—and they reproduce rapidly—there's scarcely a need for anyone to work or go shopping, ever again. Naturally, American business concerns aren't having it, and send out a "Shmooicide squad" to exterminate the adorable little economic threats. Capp returned to the Shmoos in 1959; by then, his jokes had become even broader, and his artwork was no longer the miracle of physical comedy it had once been, but his routine about the U.S. government presenting Shmoo-slaughter as necessary patriotism has, if anything, become more bitterly convincing with time. is notoriously difficult to excerpt, and both sequences here end rather abruptly. Still, the central joke that created a Shmoo fervor the first time around—that capitalism and utopianism aren't actually compatible—comes across loud and clear.