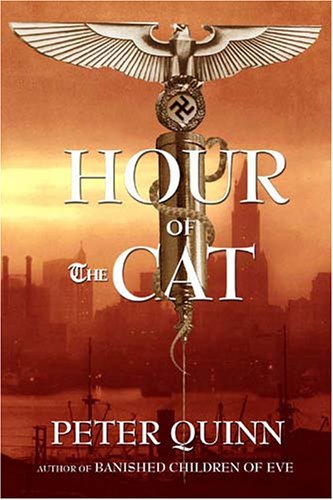 Hour of the Cat

Quinn ( ) illuminates New York City on the eve of WWII in his noir second novel. As Hitler's army encroaches on the Sudetenland and his doctors put the "science" of eugenics into practice, New York private dick Fintan Dunne seeks to exonerate Wilfredo Grillo, a Cuban immigrant accused of murdering a neighbor. As in any good boilerplate detective novel, Dunne's search for the killer takes him from the tenements of Hell's Kitchen to a respected sanatorium in the Bronx and unveils a cabal of conspirators. While Dunne fights late-Tammany era corruption, Quinn indicts America's indifference to the impending war in Europe through the characters of an English traveler writer, Ian Anderson, and a young journalist, John Taylor. On the German front, the chief of military intelligence, Admiral Canaris, tries to balance his reluctance for Germany to be at war again and Hitler's mad vision of "destiny." When Canaris learns of an SS agent operating in New York, he tries to surreptitiously alert Anderson, who once interviewed him. Shuttling between the opposing narratives, which eventually connect, Quinn's novel is as much a rebuke of the systematized violence of war as it is straight-up spy thriller: noir purists will blanche at the work's attempted reach, while fans of historical fiction will champion Quinn's method.