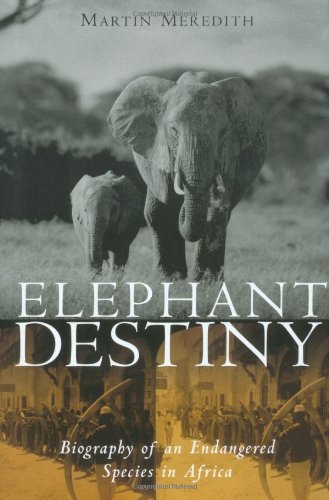 ELEPHANT DESTINY: Biography of an Endangered Species in Africa

In this solid introduction to the world of elephants, Meredith covers all the major topics including biology, social behavior, recent scientific discoveries, ancient elephantology, the devastating ivory trade, the truth about elephant graveyards and the insistent threat of extinction. Meredith demonstrates that human involvement in elephantine affairs has been disastrous to the pachyderm: the quest for ivory had caused the extinction of all Syrian herds by 500 B.C.; many ancient cultures took elephants to war; and Romans used the animals in their blood sports. Much of the book follows the history of the European exploitation of Africa's three treasures: gold, slaves and ivory. The quantities of murdered elephants and descriptions of killing methodologies are deeply affecting. Once Meredith's history reaches modern times, the shock of population counts is astounding in comparison with the numbers of elephants that roamed free in the past. Aristotle's treatise on the animals' anatomy, behavior, diet and reproduction was the beginning of a long line of interest, but only recently has science uncovered the answers to mysteries such as how separate herds coordinate movement over many miles. Meredith's primer on elephantine matters will help turn a reader's casual interest into a fascination.