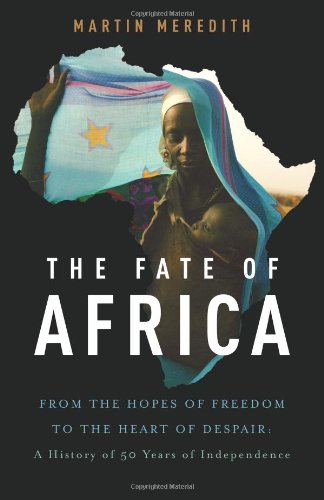 The Fate of Africa: From the Hopes of Freedom to the Heart of Despair

The value of Meredith's towering history of modern Africa rests not so much in its incisive analysis, or its original insights; it is the sheer readability of the project, combined with a notable lack of pedantry, that makes it one of the decade's most important works on Africa. Spanning the entire continent, and covering the major upheavals more or less chronologically—from the promising era of independence to the most recent spate of infamies (Rwanda, Darfur, Zimbabwe, Liberia, Sierra Leone)—Meredith ( ) brings us on a journey that is as illuminating as it is grueling. The best chapters, not surprisingly, deal with the countries that Meredith knows intimately: South Africa and Zimbabwe; he is less convincing when discussing the francophone West African states. Nowhere is Meredith more effective than when he gives free rein to his biographer's instincts, carefully building up the heroic foundations of national monuments like Nasser, Nkrumah, and Haile Selassie—only to thoroughly demolish those selfsame mythical edifices in later chapters. In an early chapter dealing with Biafra and the Nigerian civil war, Meredith paints a truly horrifying picture, where opportunities are invariably squandered, and ethnically motivated killings and predatory opportunism combine to create an infernal downward spiral of suffering and mayhem (which Western intervention only serves to aggravate). His point is simply that power corrupts, and absolute power corrupts absolutely—which is why the rare exceptions to that rule (Senghor and Mandela chief among them) are all the more remarkable. Whether or not his pessimism about the continent's future is fully warranted, Meredith's history provides a gripping digest of the endemic woes confronting the cradle of humanity.