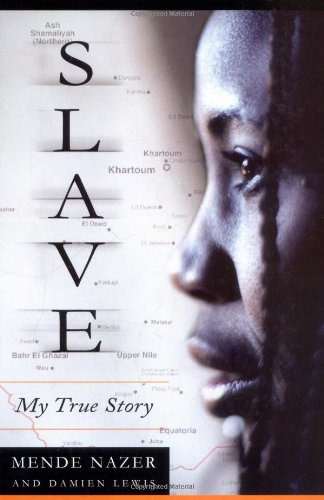 Born into the Karko tribe in the Nuba mountains of northern Sudan, Nazer has written a straightforward, harrowing memoir that's a sobering reminder that slavery still needs to be stamped out. The first, substantial section of the book concentrates on Nazer's idyllic childhood, made all the more poignant for the misery readers know is to come. Nazer is presented as intelligent and headstrong, and her people as peaceful, generous and kind. In 1994, around age 12 (the Nuba do not keep birth records), Nazer was snatched by Arab raiders, raped and shipped to the nation's capital, Khartoum, where she was installed as a maid for a wealthy suburban family. (For readers expecting her fate to include a grimy factory or barren field, the domesticity of her prison comes as a shock.) To Nazer, the modern landscape of Khartoum could not possibly have been more alien; after all, she had never seen even a spoon, a mirror or a sink, much less a telephone or television set. Nazer's urbane tormentors—mostly the pampered housewife—beat her frequently and dehumanized her in dozens of ways. They were affluent, petty and calculatedly cruel, all in the name of "keeping up appearances." The contrast between Nazer's pleasant but "primitive" early life and the horrors she experienced in Khartoum could hardly be more stark; it's an object lesson in the sometimes dehumanizing power of progress and creature comforts. After seven years, Nazer was sent to work in the U.K., where she contacted other Sudanese and eventually escaped to freedom. Her book is a profound meditation on the human ability to survive virtually any circumstances.

Escape from Slavery: The True Story of My Ten Years in Slavery—and My Journey to Freedom in America