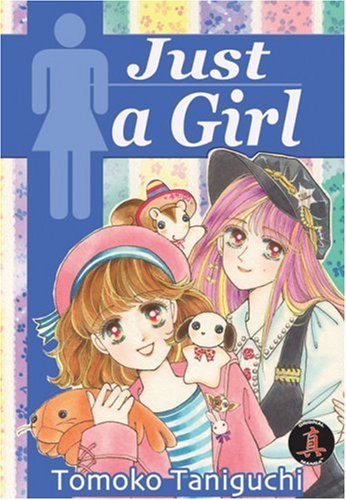 Just a Girl: Book One

Taniguchi's ( ) work is not quite in the first rank of shoujo (girl's manga) cartoons, but her genre is having its moment in the sun right now. This volume is an extraordinarily tame quasi-romance, with the cuteness factor cranked up all the way. The semi-autobiographical protagonist, Erica Fujita, is a high school student living away from home with a menagerie of adorable stuffed animals who call her "Mom" (she spends many pages talking or perhaps psychically communicating with them). Romantic tension develops between Erica's roommate Rena and her longtime big-brother figure, Minoru; everyone spends dozens of pages wondering what they're feeling and if it's okay, and occasionally baking desserts. The peak of excitement comes when two different boys sneak into the girls' dorm in drag, although Taniguchi assures readers in a note that that never happened to her. By the time each of Erica's major stuffed animals gets its own featurette, readers outside the core constituency for shoujo may have gone into diabetic shock. In a backup story, "Ask My Dreams!," a girl named Natsumi dreams her friend Satomi calls her to talk about a fight with her boyfriend, but is woken up by... Satomi calling her to talk about an actual fight with her boyfriend! Throughout the book, the fashions are adorable, the characters' eyes are enormous, and the focus of the story is exclusively on who likes whom.