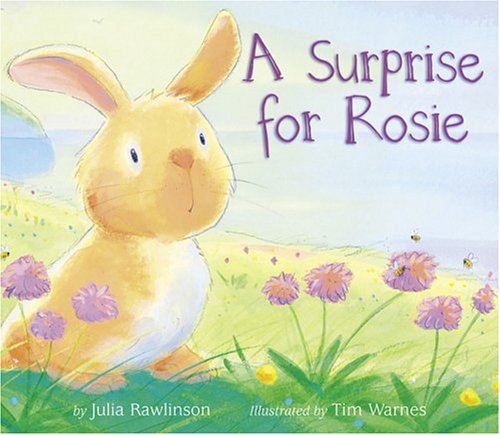 A SURPRISE FOR ROSIE

Rosie the rabbit "liked to know everything about everything," so when her father informs her that he's planning a "special surprise" for her, she searches for it everywhere. After several dead ends and vague clues from other inhabitants ("It's blue, a little bit like our eggs," a robin tells her), Rosie is tired, dirty and ready to give up. Her father seizes this opportune moment to reveal her surprise: a ride with him in a blue balloon. From there, Rosie can see " !" Unfortunately, the book itself never quite takes off—despite a vertical gatefold on the penultimate spread, which opens up as the balloon begins its ascent. British author Rawlinson seems content to literally chronicle Rosie's journey ("Brushing buttercups, over the clover, under the sun she hopped") without revealing anything intriguing about the rabbit's inquisitive personality. Warnes's (the Little Tiger series) watercolors are quite pretty in spots: when Rosie encounters the robins in their leafy home, he washes the scene in gossamer turquoises, greens and teals. Ultimately, however, the pictures' sunny innocuousness does little to move the story forward, or rouse youngsters' own sense of curiosity. Ages 3-7.