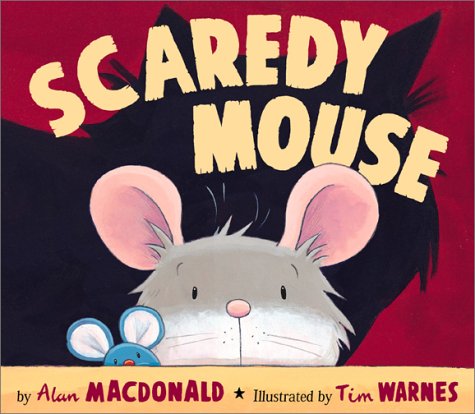 In this sometimes overdone offering, a succession of household objects scares a nervous mouse because of their resemblance to the household cat. Squeak's older sister entices him to the kitchen to eat cake, assuring him first that the household cat is asleep and, second, that he won't get lost (she ties a ball of string to his tail). The little mouse's glimpses of what seems to be the cat (variously, a cushion, feather duster, toy, etc.) invariably produce the same hullabaloo: "Squeak ran this way and that, willy-nilly, round and back." When the forbidding feline actually does appear, he gets trussed up in Squeak's string, "a mad cat, a sad cat, a feeling-like-a-fool cat," and Squeak is no longer a "worried mouse, a scared mouse, a want-to-go-home mouse" but a "bold-as-a-lion mouse." Warnes () supplies Squeak with a little stuffed mouse of his own and a good vocabulary of anxious facial expressions, but the visual transitions can be abrupt. For example, the picture of Squeak's discovery that a "long stripy tail" is actually a scarf shares a spread with a scene depicting Squeak's terror of another object. While MacDonald () implicitly encourages readers to face down their fears, his coy use of language may come across as patronizing, undermining his message of empowerment. Ages 3-7.