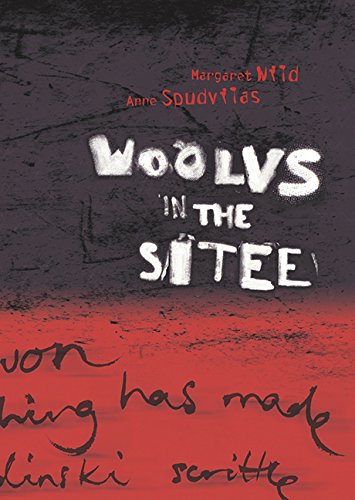 From the Gaiman/McKean school of storytelling comes this dystopian picture book, set in a shadowy, depopulated city at an indeterminate time. As in , paranoia reigns, but the solitary protagonist, Ben, corrects those who mistake his “woolvs” for “luvlee wyld creechis, running in the woods.” Judging from a view of barbed wire, a sooty wooden gate and menacing silhouettes, his woolvs are of the two-legged variety. Ben spends his days “scrooched up... in a mustee basement,” and readers see his hooded face in candlelit close-ups; his only company is the woman upstairs, who eventually vanishes. He peers out on a sickly sky of roiling rust-orange and gray clouds (“the seesons are topsee-turvee”), and someone paints a trompe-l'oeil “bloo sky with soft wite clouds” on a wall, perhaps to trick him. Wild and Spudevilas, Australian co-creators of , conjure an atmosphere suggesting widespread surveillance. Writing in the phonetic style of Russell Hoban's Wild keeps readers guessing about Ben's (and his society's) immediate history. Spudevilas's rough charcoal sketches of deserted streets and vacant interiors slash the full-bleed spreads, and watercolor washes of sour yellow, blood red and toxic green imply apocalypse. Nevertheless, no “woolvs” appear, and when Ben ventures outside in the closing pages (“Joyn me,” he says), the situation remains undeveloped. Wild's fragmentary graphic narrative establishes an ominous mood akin to Gary Crew and Shaun Tan's , but reads more as a prequel to a thriller than as a tale in its own right. Ages 10-up.