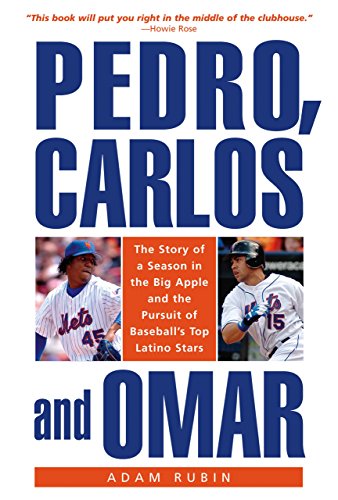 Pedro, Carlos, and Omar: A Season in the Big Apple with "Los Mets"

Hardcore New York Mets fans will be thrilled by this in-depth look at the team's 2005 season by the Mets beat writer for the . Rubin captures all the highlights of what became a memorable winning season, but he focuses on what was the biggest Mets story in years: new general manager Omar Minaya's signing of two major players, pitcher Pedro Martinez and outfielder Carlos Beltran, after the 2004 season. Rubin's exploration of the impact that the three Latino men made on a team that soon became known as "Los Mets" is entertaining; the author is a skilled sportswriter who knows how to deliver a wealth of detail in an exciting way, using telling quotes, such as Minaya's admission that before he joined the team "it looked somewhat dysfunctional." Yet Rubin's observations, however true, sometimes read like a Mets press release: Minaya "had handed Pedro a four-year, $53 million contract, and the ace had done everything to justify the commitment." Overall, though, Rubin is fair in his judgments, calling Beltran a "disappointment" who was not "the commanding presence his $119 million salary suggested he ought to be."