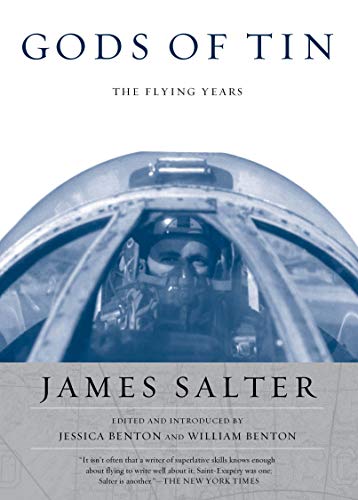 GODS OF TIN: The Flying Years

A splendid thing in a small package is this flying book compiled from several earlier works of fiction (including the great novel of Korean War aviation, ) and memoir, and from Salter's journals. Salter graduated from West Point in 1945 and went straight into the Army Air Force, later the U.S. Air Force. His training was not always smooth—he once lost his way over Pennsylvania and crashed into a house in Massachusetts. But he survived to qualify in fighters and to fly a tour of duty (100 missions) in Korea in F-86s, shooting down one MiG. After the war Salter flew fighters in Europe before resigning from the air force to embark upon a distinguished literary career. The text has excerpts from ; another novel about the European years, ; his previous memoir ; and an unpublished diary from the Korean tour. Although it's sometimes difficult to tell whose voice one is hearing, all the voices have a superb command of the English language and vividly depict the sensations and human interactions involved in flying.