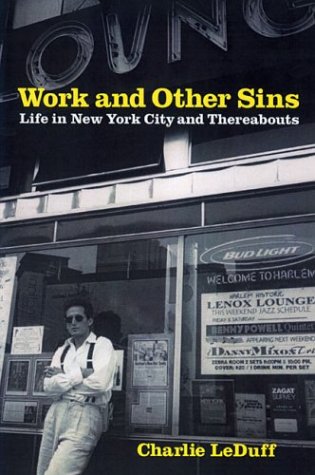 WORK AND OTHER SINS: Life in New York and Thereabouts

At least partially drawn from LeDuff's former "Bending Elbows" column in the 's Sunday City section (available only in the five boroughs), the pieces collected here sketch various habitues of city saloons, mostly working men. Clearly in the grip of some potent nostalgia for John O'Hara, LeDuff is, to his credit, pretty respectful of his subjects—bartenders and lounge singers, bankrupt dot-commers and prison inmates, lighthouse keepers and firemen, homeless freaks and transsexual hustlers—basically anyone who fits into his particular concept of poignant, grubby, overlooked humanity. His carefully dry, clipped style honors their experiences and habits, but with the notable exception of one sequence on immigrant laborers in a Long Island suburb, he does little to advance the interests of his subjects. And while LeDuff does provide a handful of familiar female types—a faded chorus girl, a stricken widow, a runaway teenager, a pair of 50-ish spinsters looking for "Mr. Dreamy" and a few old mamas—the city's female workers evidently don't rate as worthy of the name. LeDuff, who now covers L.A. life and lifestyles for the , won a Pulitzer in 2001 for a series on race, and produces some nice counterpoints of prejudices, sentiments, pearls of wisdom, and non sequiturs. "When the cocktail set tells me they enjoy the cast of losers... I smile and drink their liquor. They don't know what work is." That may be true, but it's equally clear, with myriad descriptions like "a Laura Ashley girl gone wrong," that LeDuff is writing for them, and will encounter them on his 7-city tour.