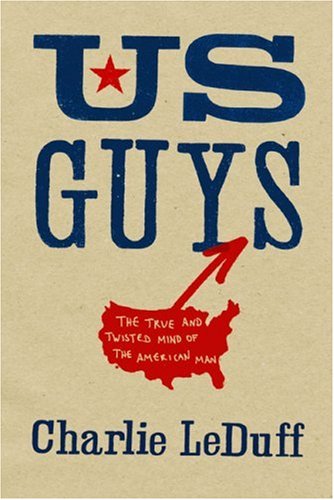 US Guys: The True and Twisted Mind of the American Man

Whether fighting the biggest guy at an Oakland biker club, talking race with a semipro Texas football team or riding shotgun with Detroit homicide, LeDuff's gonzo exploits in this book are nothing short of inspired. The reporter is a big-game hunter, with plenty of ability to sniff out, ensnare and lovingly stuff and mount his subjects. Less an analytic discourse than an "American travelogue," the book searches out "the angry forgotten middling America"—rendering a complex array of American wildlife, from gay rodeo star wannabes to Little Big Horn re-enactors. Though LeDuff's writing often comes off as aggressive and unfiltered, there are many moments when it feels self-consciously stylized, eclipsing an otherwise keen eye for detail. Authenticity surfaces in astute observations ("self-expression is dangerous when too much expression is mixed with too little sense of self"). But LeDuff's quest for edginess sometimes overwhelms his insights, through overuse of words like "cheap" ("cheap booze," "cheap-looking girl," "cheap chromium tanning salons"). His pronouncements on American life (e.g., "meaning is invented in America through new sink faucets and car waxes and aluminum siding in pastel colors") can also miss the mark. Like the hard-luck stories he chronicles, the book is angry, touching, entertaining and flawed—a prologue, one hopes, to greater things down the road.