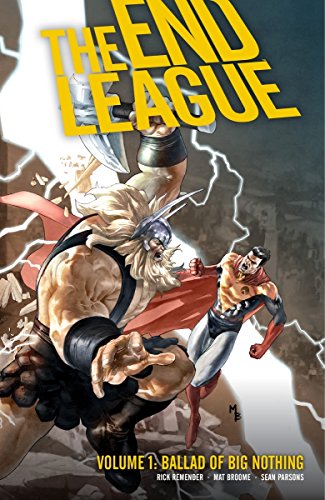 The End League: Volume 1: Ballad of Big Nothing

This first album from the ongoing comic series shows a gloomy future for superheroes. After Astonishman (a Superman stand in) was tricked into releasing a cloud of mutating radiation, many humans died while several gained superpowers. Most of the newly empowered survivors chose to make themselves masters of Earth under master villain Dead Lexington (read “Lex Luthor”); only a few joined a desperate little band fighting against the overwhelming forces of evil. In this story arc, the band tries to recover a magical talisman, the hammer of Thor, but discovers that Thor has been resurrected as a malevolent, incredible hulk who kills Astonishman. The apparently hopeless struggle continues from there. Though it feels closer to 's mood, the book explicitly demands to be compared with , and some pages do look like Dave Gibbons's art while the script sometimes sounds like Alan Moore's writing. So far, however, a comparison shows how much more efficient Gibbons's art is and how much better Moore handles pacing, characterization and overall content.